Pointing to examples like Twitter and Facebook and how they found their financial model much later is not a good excuse. Even social media products have clear metrics that they measure in the early stages. Social media and game companies count on the fact that they are acquiring a user’s attention and data, and those are valuable assets that can be quantified and monetized later. But we can measure the user’s attention and willingness to relinquish data right away.

Social media companies are similar to a mining operation. If you were digging up gold from a mine shaft, no one would complain that you didn’t have a detailed plan and metrics to sell it in the market. We know gold is valuable and we can figure out how to sell it later. The value is clear. We just need to know if there is gold down there and how much.

To say, “we’re an early-stage mining operation and we don’t need to focus on a business plan or metrics,” would be an absurd statement. We can quantify how deep, far, and fast we’re digging. We can quantify the mineral content of the soil and the geology of the area. No one would accept the qualitative data of a dowsing rod to make a serious mining investment.

Startups, more than ever, should start with a hypothesis-driven financial model from Day Zero. That is why we use innovation accounting.

How to Solve the Problem

To implement innovation accounting for an early-stage project we need to:

There are a ton of assumptions that we make when starting a new innovation project. Fortunately, there are a number of different templates and frameworks that capture those assumptions, such as the business model canvas and customer personas. But none are as useful to innovation accounting as a Storyboard.

A storyboard, similar to a user-journey map, maps each step of the user journey from start to finish. This includes hearing about the product or service, actually using it, renewing their subscription, inviting friends, or simply finishing their use and throwing it in the trash.

Storyboards can be used to organize our assumptions into a clear series of actions that the user must take in order for us to both provide value and capture the revenue (or impact if you are a non-profit organization.) The advantage of a storyboard is that it represents observable moments that we can measure. Frame to frame, step to step, each moment in the user journey transitions into another — and we can measure that conversion rate from moment to moment.

If the first step of the story is downloading an app, and the second step is signing up for an account, that is a conversion rate we can measure — the % of people who sign up for an account after downloading the app. If the next step is applying a filter to a photo, then we can measure the % of users that apply a filter. From qualitative data about what the customer wants (to take beautiful pictures) we can map out our ideal story to deliver that value on quantitative metrics.

Even from Day Zero with just a nascent idea, we can create the step by step measurable process by which a person becomes a customer. We may not know the actual conversion rates, but we know what we need to estimate and measure. From there, it is tempting to go straight to a spreadsheet, but sometimes a quick detour will help.

Once you have the basic story down, it’s useful to abstract this into a visual financial model. This really is the same thing as a storyboard where the user’s journey from acquisition to purchase is mapped out. However, we will want to simplify some aspects and include retention (if and how customers buy again) and virality (if and how customers refer their friends to become new customers) which are often left out of the storyboard.

A storyboard or user-journey map is often too detailed for what we need in our financial model. We don’t need to know what % of users apply a filter to a photo, we need to know how many users upgrade, stick around after four weeks, or purchase something so we can zoom out to the bigger picture and only use the most critical metrics that signify important progress towards our business model.

Startup Metrics for Pirates is a widely adopted framework with the right level of simplification for the purposes of innovation accounting. The five components of this framework are Acquisition, Activation, Revenue, Retention and Referral (AARRR, hence the pirate name.)

Acquisition (getting a user to your service or product), Activation (getting the user to have a great first experience and recognize the value), and revenue (getting the user to pay something) should already be on your storyboard. It is only a matter of identifying the step in the storyboard that represents the critical points in your business and thus represent the most useful metrics. This simplified, three-step user journey is often represented as a vertical funnel (although representing it horizontally makes no difference).

However, Retention and Referral are usually not included. That’s just because a storyboard or user-journey map are typically linear. Assembled with yellow sticky notes, it’s hard to represent retaining a customer or referring a friend (although we’ve seen some creative uses of blue sticky tape). But with a journey simplified into a shorter conversion funnel, loops can be more easily added to show where a user retains or refers a friend from a later stage (such add Revenue) back to Acquisition.

With an easy-to-understand visual model and these last two Pirate Metrics in place, we’re ready to make the leap to a spreadsheet.

A hypothesis-driven financial model sounds complex, but it is not. It can and should be as simple as your visual model. Each step can be converted into a row in a spreadsheet, starting with Acquisition for the top line to represent the consistent number of organic visitors to your website or storefront.

However, unlike a traditional financial model, the number of visitors is not guessed from month to month and hard coded. Instead, a single assumption sets the number for that variable, and a formula varies the value from month to month in the spreadsheet. That way, if the assumption turns out to be wrong, changing a single cell in the spreadsheet will correct it throughout the model.

Each subsequent row applies the same logic as the visual model. The % of visitors that activate in your user journey becomes a variable that is held constant from month to month, changing visitors into users. The next row might convert users into paying customers who have taken a trial of your product and decided to buy based on another variable, the % of customers who purchase after trial.

Referral and Retention loops require a bit more thought as they impact Month 2 based on Month 1, but still only require a couple of additional rows of calculation.

With minimal effort – most teams take 1-2 hours to do this under guidance – a simple spreadsheet is constructed which is driven by a few variables. Those variables can be updated as more information is available.

Of course, this is a wild oversimplification. But with startups, start simple. We can add complexity over time.

With a tech startup, we often don’t even model costs on Day 1 because user growth might be all that matters for a social media app or game. However, costs can be introduced and more complexity added as the company grows.

This basic model allows us to do some basic scenario testing. We can immediately start testing out different acquisition and retention rates to see what the impact on our growth will be. We can even set certain conditions our business must reach in order to meet our growth targets.

With a limited number of variables, we can see that if our actual retention rate falls below 20%, our referral rate must increase accordingly if we are to continue to grow. This sort of scenario analysis is basic, but effective for helping early-stage innovation tests set pivot-or-persevere thresholds for their business and start designing tests to establish the actual numbers.

Although entrepreneurs can dictate the shape of their business model, reality will ultimately dictate what numbers go into the variables.

Here is a financial modeling template for startups if you would like to try it out.

Lastly, we have to integrate uncertainty.

Although the basic hypothesis-driven financial model allows us to play around and try out different scenarios, it doesn’t actually tell us what is going to happen or the likelihood of success. But we can do this if we get a little data and integrate uncertainty.

Statisticians have a few tricks we can adopt here. Hurricane forecasts, baseball games, and even startups can use a technique called the Monte Carlo Method to predict outcomes based on uncertainty.

Instead of entering a single number into each of our variables, we enter two numbers to represent the range and a distribution curve which tells us the likelihood of any individual outcome within that range. This is not easy.

For example, I may not know the outcome of rolling two six-sided dice and adding the numbers, but I know for certain that it is between 2 and 12. It’s most likely that it’s 7, but 50% of the time the number will be between X & Y.

We can make the same estimations with our business model variables. We may not know what price the customer is willing to pay, but we should be able to say that they will pay between $10 and $100. That’s all the information we need to start building a Monte Carlo simulation.

The math behind choosing the right distribution curve is tricky, and the art of choosing the right range requires a bit of training. But both can be accomplished with a little effort. Building the right spreadsheet is even more complicated, but more and more tools are being created that allow teams to run Monte Carlo simulations right in their spreadsheet or in a specialized application.

Here is a Monte Carlo simulation example if you would like to try it out.

In practice, this means that innovation teams and executives can create go / no go criteria for their pivot / persevere decisions. You want your project to be at least 10% likely to reach 1B in revenue? The Monte Carlo simulation can tell you if your project has reached that threshold. If not, you can stop the project with confidence that it would not achieve your goals and move on to test the next idea.

The output of the Monte Carlo simulation is a chart that shows a range of possible outcomes at any given point in the future and allows you to calculate the likelihood of any individual outcome.

This process is repeatable and is applicable to all types of business models. It doesn’t matter if it’s B2B, B2C, B2G, a network, a platform, or anything else not yet invented. Building a model from Day One allows innovation projects to make better decisions, make useful predictions, and demonstrate real progress to stakeholders. 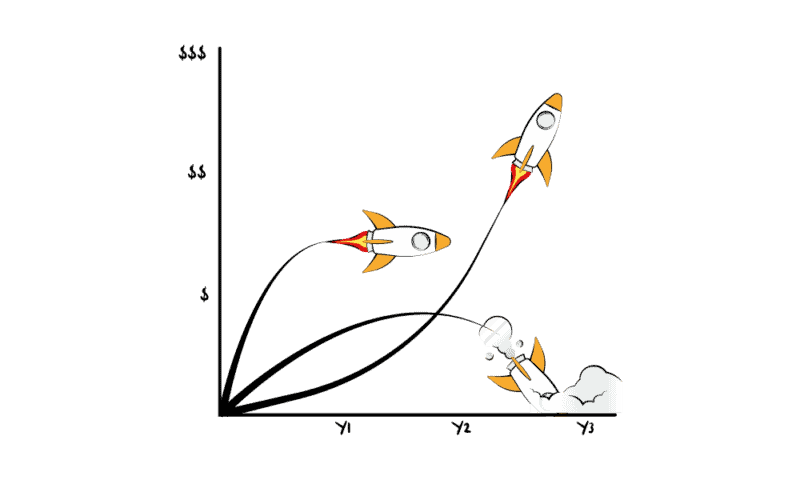 Learn how to create a financial model that works for innovation projects.

MORE ABOUT THE COURSE

Make better decisions and learn how to quantify the chances
of success earlier and more accurately!