The Danger of Corporate Growth Metrics

KPIs can kill you. Or at least it can kill your efforts to create a truly disruptive innovation.

And I can’t think of a more deadly KPI than growth. 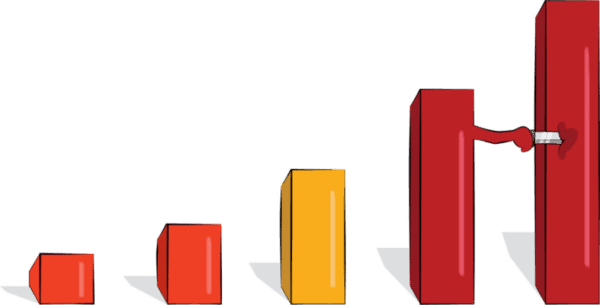 Corporate growth is written into the foundation of the capitalist economic system — nearly every executive has one or more growth targets in their bonus plan. But these metrics can be exceedingly dangerous if we don’t understand what kind of growth is actually valuable.

There are a few types of growth that, as an executive, we might (be told to) focus on.

This is not about the profit margin, revenue, or market share. We’re talking about growing the sheer number of employees.

Most executives would never admit to setting this as a KPI. In fact, most HR departments in large companies are usually focused on cutting headcount, not growing it. But it shouldn’t come as a shock that many managers judge their own performance on how many people they manage.

As the headcount increases, so does the sense of accomplishment. It doesn’t matter if the company is turning a profit or not, the company is growing! We must be doing something right.

Obviously this is not a great metric. Adding people doesn’t necessarily make you more effective. Adding headcount represents a tremendous amount of fixed costs that are very difficult to get rid of in times of trouble. If revenue doesn’t keep pace with the headcount, corporate growth becomes a liability. Growth for the sake of growth can be dangerous to most business models.

Everyone loves profit. Even nonprofits enjoy having extra cash flow at the end of the year that they can reinvest.

But a focus on profit can draw attention away from investment opportunities that help your corporate growth. Increasing factory capacity or opening an adjacent new market takes money, and although your profits shrink in the short term, moves like these are necessary to ensure long-term survival.

Amazon didn’t make a profit for its first 7 years. Airbnb, Uber, Slack, Zillow, Pinterest, Dropbox, and many more of the most recognizable names in tech are still operating at a loss. But these companies wouldn’t be valued in the billions if the market didn’t believe that losing money today means making money tomorrow.

Executives whose KPIs are focused on immediate and consistent profitability are driven to squeeze every penny out of existing operations. Headcounts may be cut and people will be asked to do more with less. Investments will be postponed and creative accounting tricks will be used to massage the annual fiscal statement. Everyone will get their bonus this year. But what about the next?

Nothing kills a company today like a reluctance to innovate, and nothing stifles innovation like a demand for immediate ROI.

Nothing kills a company today like a reluctance to innovate, and nothing stifles innovation like a demand for immediate ROI. Whoever presides over this profitable period will be promoted, and the person who inherits the job next year will find the innovation department decimated. Instead of growing profit, some companies opt to focus on market share. This is particularly true of tech companies in new markets, which will throw billions from venture capitalists at unprofitable business models (see that list in the previous section).

Some unprofitable companies, like WeWork, hope to simply IPO before the weakness in their business model is exposed. Their organizations grow in strange and lopsided ways with an inordinate amount of resources devoted to PR and investor relations. They grow like an awkward teenager whose skinny legs haven’t caught up with their body.

Other companies, like Twitter, Facebook, and Google, simply believed early on that they would figure out a way to make money later. Amazon, famously, doesn’t make much profit but its stock price continues to soar as it aggressively muscles its way into more industries.

The disadvantage here is that there is little room for error. Some investors and shareholders actually prefer making money and can run out of patience. A CEO too focused on corporate growth without the confidence of the market can quickly find themselves displaced. This is what happened to Steve Jobs before he resigned from Apple in 1984. Jobs believed in the future of the closed-architecture personal computer. The market did not, and Jobs’ focus on cornering the PC market with an expensive Macintosh ultimately cost him his position.

These companies are also vulnerable to sudden shocks in market dynamics, which can break the delicate balance in the company’s cash flow and lead them from break-even to utter disaster. A pandemic year would not have been a good time to launch an in-home massage service.

Like profit, top-line revenue growth is usually a good thing. But an unhealthy fixation on top-line growth can skew innovation efforts towards incremental progress, sidelining the more transformative projects.

Core innovation should, of course, result in revenue growth. Every new feature or marketing optimization should sell more of the existing portfolio of products. If it doesn’t, it’s just achieving parity with the competition, which generally goes unrewarded. No one gets a promotion by playing defense all day. If an improvement is not increasing revenue (or offering some other reward), it is probably not particularly innovative.

No one gets a promotion by playing defense all day. If an improvement is not increasing revenue (or offering some other reward), it is probably not particularly innovative.

Executives truly looking for top-line revenue growth often look towards adjacent innovation, selling an existing product in a new market. This will typically create revenue growth, but a small amount at first.

As existing products are launched into new markets, the focus is generally on acquiring market share, and any profit is reinvested into the marketing budget. As investments are made in infrastructure and distribution is scaled up, profits are meager at best. But the emphasis on revenue growth, rather than profitability, still allows executives to focus on opening new markets, even if they are not profitable at first.

The problem with revenue growth as a metric comes when potentially transformative innovations, such as selling a new product in a new market, are ignored as too small and distracting. For an aspiring executive, an adjacent innovation that can pay off in 3 years is much more attractive than a transformational project which might be lucrative in 10 years.

For an aspiring executive, an adjacent innovation that can pay off in 3 years is much more attractive than a transformational project that might be lucrative in 10 years.

Would you like a promotion now? Or do you want to forgo all revenue growth and fight tenaciously for your transformation project, spending the next decade fending off calls for your termination? It’s an even more obvious choice if the CEO has set your performance review and bonus package to a revenue growth KPI. Worse than long-term transformational projects, there are some types of innovation that can stagnate revenue, or even make it decline. These innovations take market share from existing products, potentially at a lower price point with slimmer margins. This is known as cannibalization.

Most large companies don’t really like to launch new products that directly cannibalize an existing, profitable product. Intrapreneurs pitching products that are potentially cannibalistic often express frustration at the level of resistance to their innovations.

Well of course! What executive wants to put a lot of effort into replacing their old product with a new product that doesn’t result in greater profits?

This is infinitely worse if the new product is potentially cheaper for consumers and might give the company less margin Revenue won’t just be cannibalized, it will shrink.

Blockbuster was a pioneer in online streaming when CEO John Antioco launched their streaming service in 2004, and did away with their most lucrative business, late fees. He essentially replaced an existing, profitable model with an untried new technology. Although Antioco is remembered as the man who declined to buy Netflix for a paltry $50 million, he recognized the future value of streaming and the declining value of rentals, so he was willing to cannibalize their profitable base product to ensure the long-term success of the company.

Blockbuster’s board was not so visionary. By 2007, Antioco was out as CEO, late fees were back, and streaming was no longer a priority. The new CEO, Jim Keyes, didn’t see why they shouldn’t rely on a business model that had been successful for years. Three years later, Blockbuster filed for bankruptcy. They were unwilling to cannibalize their rental revenue for a streaming service, which allowed Netflix to devour their market share. The focus on growth led to decline, and eventually the (near-)death of the company.

Cannibalism isn’t growth, but it can result in market share growth, so it’s worth listing separately here.

Focusing on the wrong metric can lead to a counterproductive environment for corporate growth — a poorly assigned growth target can generate shortsightedness, disconnected silos, and internal politics.

Companies are often told to focus on the one metric that matters to the exclusion of all others. While that focus can be beneficial to a company united under one clear goal, it can be disastrous if that company chooses the wrong metric for their business plan — or worse, can’t decide on what metric to follow.

Companies with large, diverse portfolios should judge business units and projects with different metrics applied at different stages. The core businesses can focus on profitability and revenue growth. Adjacencies can focus on market share. Transformational projects should ignore internal numbers and focus on the growth of the total market size to determine if the transformation is worth it.

Special thanks to Navarre Joseph and Janka Krings-Klebe for reviewing and giving feedback on this post.

Stay ahead of disruption and the competition. Be the leader in your market! We will assist you in building an effective innovation strategy. We also cover how to determine the ROI of innovation, how to fund innovation, innovation budgets and how to communicate this with stakeholders. You will design a metered funding approach for your portfolio and see how it can inform your strategy, where to pivot and where to double down.